Since 2018, Flyleaf Creative has been collaborating with MCC Theater, helping to position the organization for the recent opening of their new theater complex in Hell’s Kitchen and establish a comprehensive suite of brand identity tools for institutional and show-related materials. Major works consist of an extensive signage program, an outdoor advertising media campaign, key art for five shows per season and branding guidelines.

In collaboration with MCC Theater’s creative partners, Flyleaf Creative developed a branding suite that offers flexible systems which capture the essence of their mission: producing theater that challenges artists and audiences to provoke conversation.

The logomark is a nod to the physical theater space which is filled with beautiful angled planes designed by Andrew Berman Architect. It is set in the typeface Kommisar, and is paired with Ringside, a wide-ranging family of weights and widths, that continues to build on this idea of flexibility in the identity system.

As the branding evolved, we took cues from their physical theater space and developed a framing system that extended that physicality into key art for their inaugural season. Below are a couple of examples of key art developed for shows in 2018 and how the brand identity has been further enforced in 2019. 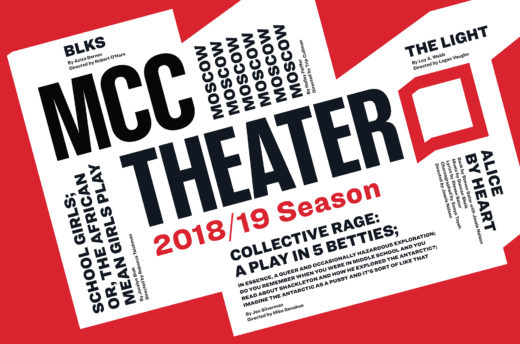 Flyleaf Creative collaborated with MCC Theater and Andrew Berman Architect to design a comprehensive Signage Program for their brand new home in Hell’s Kitchen: The Robert. Wilson MCC Theater Space. The program included primary exterior signs such as main entryway signature signage, custom lightboxes and MCC marquee in the main vestibule; secondary signage for major donors and interior wayfinding and tertiary signage. The new space houses two theaters, a welcoming lobby with a bar area for pre- and post-show discussions/events, and will bring MCC’s rehearsal spaces and administrative offices under one roof for the first time since their founding in 1986.

To coincide with MCC Theater’s arrival in Hell’s Kitchen, Flyleaf Creative developed an outdoor advertising campaign strategy. The goals were to claim and define the cultural space, tone and creative environment that MCC Theater would bring to the neighborhood, as well as engage the community in a creative “dialogue” consistent with MCC Theater’s institutional brand.

This brand awareness teaser campaign was a way for MCC Theater to introduce themselves as the new neighbor while helping to foster a positive and creative revitalization in the Hell’s Kitchen community.